It’s 30 years since I was a librarian 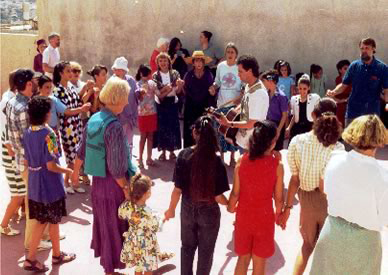 This year, 2022, is the 30th anniversary since of giving up a career as a librarian to concentrate my life fully on leading dances and sufi events. Although to many at the time it seemed rather foolish to leave a well-paid, well-established managerial position I had known for some years before that my work needed to be something that really came right from my heart. I had no idea if I would be able to make a living out of leading spiritual dances. Certainly there weren’t many others doing this successfully.

It was certainly a bold step to take but I knew that despite the fear I felt I had to do it. A year or so earlier a close friend of mine had died of cancer at the age of 40 and this gave me quite a wake up call. Up until then I had always said to myself that I would follow my heart some time in the future. With my friend’s passing I realised that the future isn’t guaranteed by any means and that I needed to act now. It was a bit like jumping of a cliff of uncertainty and I remember thinking that I would see how it went leading dances for a couple of years and if it didn’t work out I could easily resume work as a librarian. Two years passed and I realised I had only just started.

An article was written by a journalist, James Wilson and appeared in the Westmorland Gazette around that time in 1992 which I am reported to have said. “I have no regrets about giving up a well-paid job. I would have got to 50 or 60 and felt ‘I should have done that!” Having passed both of those milestones in age I can still honestly say that I have no regrets. It’s been an incredible journey so far. Not always easy by any means but without a doubt the best choice I could ever have made. Naturally I am still learning and still perfecting my craft. What a blessing it is to consider it work to be continually creating opportunities for people to experience peace, joy and happiness in their hearts.