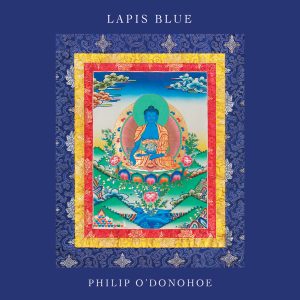 It’s been quite a while since I sent out any newsletters and I apologise if you have been wondering why they had stopped so suddenly. The answer is that I simply had to turn my attention to other areas of activity last year. The intention now is to send out blog posts from my website from time to time that hopefully will be of interest to you.

Some things have been even longer in materialising. Incredibly it’s been many years since I released any studio recordings, 16 years to be precise, so it’s with great pleasure that I can now tell you about Lapis Blue, a brand new recording of original material. It was recorded last year at a delightful recording studio near Gillingham, Dorset, not far from where I live. http://www.conversionstudios.co.uk/index.php

Josh Parker, the studio manager, was such a great guy to work with. Incredibly empathetic, a master of all the studio equipment who had an uncanny ability to get the sounds for each track just the way I imagined.

These songs have developed gradually over the past 10 years and each one in its own way has been of great significance for me. They are all based on powerful healing mantras. The four spiritual traditions from which they arise are those I have immersed myself in throughout my life.

In essence these mantras have been some of the most important messengers for the healing of my own heart. Many of you have sung and danced these mantras over the years and have told me how much they also have touched your hearts. It’s a blessing now to be able to share them with you in this way.

In this photograph I am playing a Lavta, a Greek traditional instrument, which appears on a couple of tracks.

All the information about Lapis Blue can be found on here: http://philipodonohoe.local/lapis-blue/

There are samples for each of the tracks that you can listen to. The recording available as an MP3 download from iTunes, Amazon and CD Baby. And of course it can be purchased as a CD directly from the website.

Many of you who have seen me at workshops this past few months have already bought a copies of the CD and I am deeply touched by all the kind words of appreciation from many of you.

May these songs be a healing blessing to the ears of your heart.

As a bonus I would like to share a special film taken by a really gifted film-maker and friend of mine, Mark Cameron Minard. The film is of the Blue Moon that took place last September with the soundtrack being the Medicine Buddha Mantra taken from Lapis Blue.

Much Love and Many Blessings