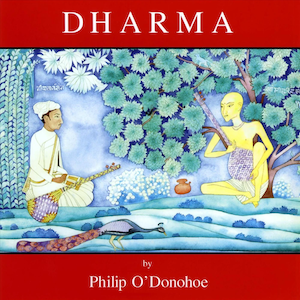 DHARMA: Chants from the Dharma Traditions

These chants are from the Hindu tradition, more correctly called Sanatana Dharma and the Buddhist tradition. Dharma could be said to be the primordial law and cause of all things from which emanates all physical, moral and metaphysical order. A significant part of my own Dharma, path in life, has been to sing these chants. They have filled and expanded my heart and I have felt their blessings and influence in my life for many years. I am honoured and pleased to be able to share them with you now.

Cover painting Tansen and Hari Dass by Kathleen Shaw based on an original painting by Kishangarth circa 1760. Tansen was one of the nine jewels of the court of Emperor Akbar, the Moghul ruler of India in the 16th Century. Tansen’s renown as a singer and musician continues to this day especially in India.